We recently spent a week at a family camp and one of the activities was rappelling from the top of a 45′ tower (or you could climb the other side of it).  My eight year old couldn’t get enough of this.  He was absolutely fearless and did it over and over.  I made him stand for the portrait above before he bounded up the stairs so he could do it once again.

The shot above didn’t turn out quite as cool as I’d hoped but it’s fun nonetheless.  While out on a photo walk on the University of Texas campus I set up my camera on my tripod as the photographer crowd gathered on the steps of the UT Tower.  As people milled around I captured shots in a semi-regular cadence.  My idea was to capture people in different positions and mask them together in Photoshop.  When I uploaded my photos to my computer it turned out that I really didn’t capture enough frames.  For example, look at the guy in the red jacket.  He probably wandered all around the scene but in reality I only capture him in a few spots.  There are a couple of people who did appear in widely varied positions around the scene.

The photo above was captured at the base of the UT Tower, a prominent 307-foot building on the University of Texas campus.  A couple other views of the UT Tower are shown below. 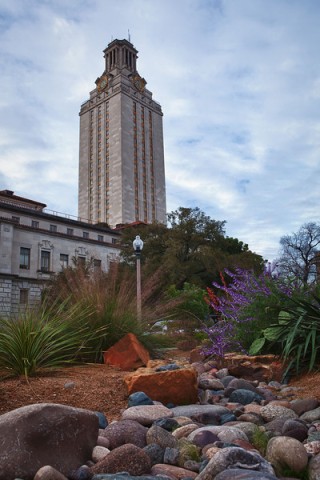 I recently downloaded a trial version of Nik Software’s HDR Efex Pro.  I’d been semi-disappointed in many HDRs I’d created in Photomatix and had heard many people say they’d made the switch to Nik.  If you’re hoping for a complete review of Nik HDR Efex Pro I apologize in advance — I’m only going to give some impressions here.

First, a bit on Photomatix.  It’s great software in many ways and I’ve used it to make many cool (IMO) images.  However, in many of my HDRs of late I’ve ended up doing so much masking in Photoshop after tone mapping in Photomatix that I’m practically producing a composite of the original exposures.  Photomatix often doesn’t handle motion to my liking — leaving way too much work to do afterwards.  I’ll readily admit that it could be the user — I’m no wizard with Photomatix.  It could also be that I’m getting pickier as time goes on.  On the plus side, I find Photomatix to be much faster than Nik but I don’t process all that many HDRs so that’s not a huge factor.

I used Nik HDR Efex Pro to process all but one of the images in this post.  For my own comparison purposes I processed another Hawaii coast photo — similar to the one at the top of this post — with Photomatix.  It’s not completely apples-to-apples since I didn’t process the *same* photo but I ended up having to spend a ton of time in Photoshop fixing up the Photomatix image (basically ending up with a composite as I mentioned above).

As for the mechanics of using Nik HDR Efex Pro, it’s quite simple.  In each of the images (5-ish?) that I’ve processed with it I’ve started out with a preset and tweaked from there.  Of course I’m still learning all the sliders, etc. but I’m happy with it so far.  I find the “control point” concept useful (it defines circles in which you can separately tweak portions of the image) but I would prefer that it worked more like the adjustment brush in Lightroom where you can choose exactly where the effects are applied.  The final images here aren’t completely to my liking (some spots would get fixed if I were to spend more time on the images) but are illustrative enough for this post.

Most of my family still lives in the Chicago area so we make a yearly trek to IL.  As part of this year’s trip I took some of my family on an overnight visit to downtown Chicago.   Life has kept me from being able to spend much time on photography but I had hopes of doing some “serious” photography in the city this year.  I figured that being on vacation would allow some time for pics but the highest priority was spending time with the kids and that’s what I mostly did.  I did manage some shots but really couldn’t spend time composing or trying different vantage points.

That said, I snuck out of the hotel room at sunrise and headed toward Michigan Avenue.  I caught a glimpse of the orange light of the early morning sun on the Trump Tower from a block away so I picked up the pace and walked to the Chicago River a block east of Michigan Ave.  In order to get the composition I wanted I had to set up the camera on one of the pillars of the stone wall above the river.  I was a bit nervous about that but just moved with caution to avoid knocking everything over the wall.

There are several things I like about this shot.  The orange glow of the Trump Tower was just right.  I liked how the wide-angle lens makes the buildings on either side of the river lean as if they’re getting ready for a cross-river showdown.  Finally, I’m partial to Chicago and therefore just think any downtown shot in the city looks cool.  I hope you like it too.

As for processing, this shot started life as a 4-exposure HDR (-4, -2, 0, +2).  Three exposures were nearly sufficient but I needed the -4 exposure to tame the reflective highlights at the bottom of the Trump Tower.  I brought the tonemapped image into Photoshop with the four original exposures and masked pieces of each into the image.  I use Noiseware to clean up the sky.  Finally, some sharpening and curves adjustments and I was pretty much done.  I had intended to play around with Topaz Adjust to see what I came up with but I never got around to that…maybe I’ll have some fun with that in the future.

Here’s a daytime shot of the Trump Tower.  As you can see, there’s no orange in that building at all — the morning sun was simply *that* orange.

The Organ of Saint-Sulpice

In my old age I’ve come to love classical music over anything else.  If I *had* to pick, I’d say that Vivaldi’s cello concertos are my favorite in the genre.  Another favorite piece is Handel’s Organ Concerto #13.

I think pipe organs are pretty cool and I love to here them in person.  A few years back we attended a wedding in a huge San Antonio church and the beautiful organ was used for preludes as guests arrived.  Quite enjoyable…

My wife and I were fortunate enough to listen to an organ recital at Saint-Sulpice Church in Paris (organ is pictured above).  There are regular Sunday afternoon recitals which are typically performed by an American organist named Daniel Roth.  There is another organist who occasionally plays and we never did find out who was playing that day.  The organ is approximately 150 years old and is nearly the same now as when it was first installed (an electric blower being the most significant addition).

The church itself is quite amazing.  The current building was mostly constructed in the late 17th and early 18th centuries.  However, even the today the church is technically not finished as one tower was replaced in the late 18th century but its planned twin was never built (an old mismatching tower remains).  Saint-Sulpice is comparable in size to Notre Dame Cathedral (barely smaller) and we found it just as interesting inside.  The image below gives a view of one small portion of the interior.

Since our trip to Paris it seems that I’ve never been able to catch up with “things”.  Photography has certainly been a temporary casualty but I’ve managed to process most of the photos from the trip.  Most pics got the quick exposure/contrast treatment but I managed a few HDRs as well.

We spent our six nights in Paris but included a day trip to London during the week.  I booked us in “leisure select” (effectively what we’d call business class) on the earliest Eurostar between Gare du Nord (Paris) and London St. Pancras and then the latest train back to Paris.  Frankly the train rides were quite enjoyable and relaxing.  The image above was taken in the St. Pancras train station and shows a statue called The Meeting Place by Paul Day.  The architecture (interior and exterior) of the train station alone would have made for a decent day’s photowalk.  I read somewhere (probably wikipedia) that the station underwent a $1 billion+ renovation in the last decade.  There are still some construction fences around portions of the exterior — I only noticed because they ruined some photo opportunities.

The pic below was taken on the bridge at the entrance to the Tower of London.  A catapult sits in the long-ago drained moat surrounding the walls.  While this image doesn’t really capture the essence of the Tower itself, it certainly helps me re-live that single day we spent in London.  Sunny and warm, blue sky with awesome clouds — such a rarity in London.  It seemed that everyone we met made some comment to the effect of “You sure got some of our best weather for your visit”.

Catapult at the Tower of London

The Tower was amazing.  The history of the place is SO interesting.  The Beefeaters tour was quite entertaining as well.  We spent about three hours inside and that was skimming a lot of the text on plaques and such.  We’d certainly go back and spend more time if we visit London again.

The HDR above was created using three handheld exposures.  Tonemapped in Photomatix with some typical contrast, sharpening, etc…no blending with original exposures.