There’s no one method to use when doing this.  My ideal aperture would be something around f/11 to be in the sharp range of the typical lens and have reasonable DOF.  However, I don’t own a neutral density filter so I sometimes have to stop down to be able to open the shutter as long as I’d like (I used f/16 in these photos, f/22 in some of the others I took).  Sometimes I’ll use my circular polarizer (gets me 1.5 to 2 stops).  I pick a shutter speed next — via experimentation to get the definition (or lack of) that I’d like in the water.  ISO is ideally 100 but I’ll vary that as necessary.  Then I play around with all three exposure variables until I get “good” results, the definition of which varies from outing-to-outing.

Composition options were endless in this park, but rather tricky.  Unless I was zoomed in very tight on a feature, the angles were such that something always looked out of whack.  When one feature was nicely framed, something else was awkwardly framed.  It made it rather interesting… 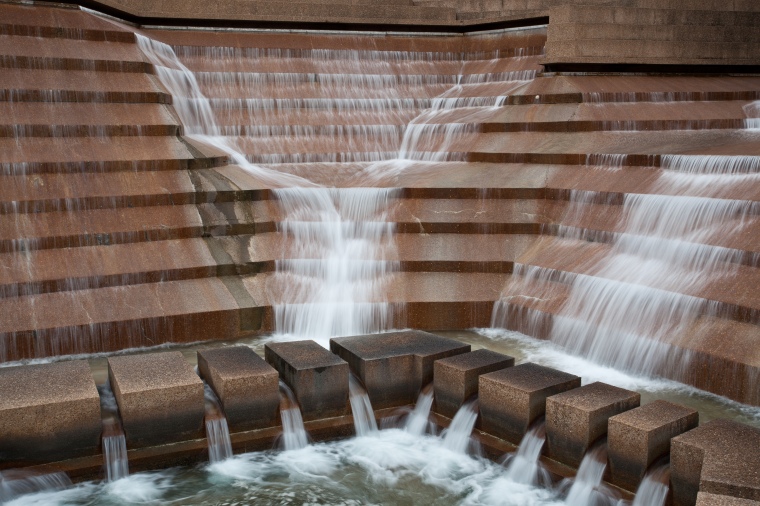 There’s something amazing about a building which is still standing after nearly 1000 years.  This is St. John’s Chapel in the White Tower…in the Tower of London.  This image is from 3 handheld exposures — part HDR, part composite.  The dynamic range was extreme here with the dark shadows and the bright light streaming in the windows.

During my not-a-photo-trip to Paris and London this past spring I still managed some interesting (IMO) shots.  This image taken in the Great Court inside the British Museum has been one of my favorites from the standpoint of its composition and the contrast of the blues and greens against the drab-ish stone.  Again, that’s just my opinion of course.

I’ve had difficulty processing this image, however.  I really wanted to process as an HDR and the three original handheld exposures were extremely difficult to line up properly.  I’ve noted that when shooting wide angles a slight bit of movement and/or rotation between exposures makes a huge difference.  Because of this, Photomatix did a very poor job of alignment and this left a lot of ghosting in the image.  Of course, I had the ability to mix the tonemapped image with the original exposures but it was proving to be a lot of work to tweak pieces of each layer to line up with the section I wanted to mask it into.  It also took more work than usual to get the original exposures looking just right in order to match the main image.  I pushed the texture and HDR-ishness farther than I normally do…just because it seems to work here.

One mistake that I couldn’t overcome was the fact that the light coming through the glass roof was blown out in all the exposures.  I call that a “mistake” but I really wasn’t taking the time to think through all the shots because I was doing very well at keeping the trip about time with my wife, not about photography.  Heath O’Fee has a good post about mistakes like this by the way — they don’t always ruin the shot [Here’s the link: http://yycofee.wordpress.com/2010/08/30/mistakes/].

Well, there it is — one of *my* favorite images.