A Pile Of Benjamin Franklins 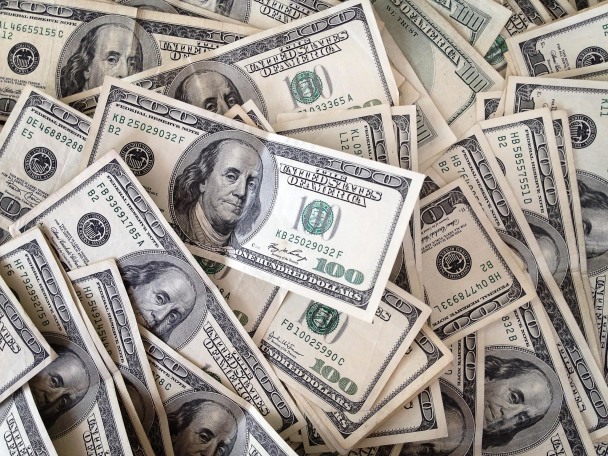 We’ve always taught our kids to stay out of debt so when my son went to buy a car last weekend he brought a big stack of “Benjamin Franklins” ($100 bills for those not familiar with US currency).  The purpose was twofold: (1) paying cash and avoiding debt as I mentioned and (2) having a stack of bills to flash in the negotiations a la Dave Ramsey.  Once we determined the car was a good buy my son did his negotiating thing and a deal was struck.  While papers were being written up I spread the bills out and snapped some shots with my iPhone just for fun. 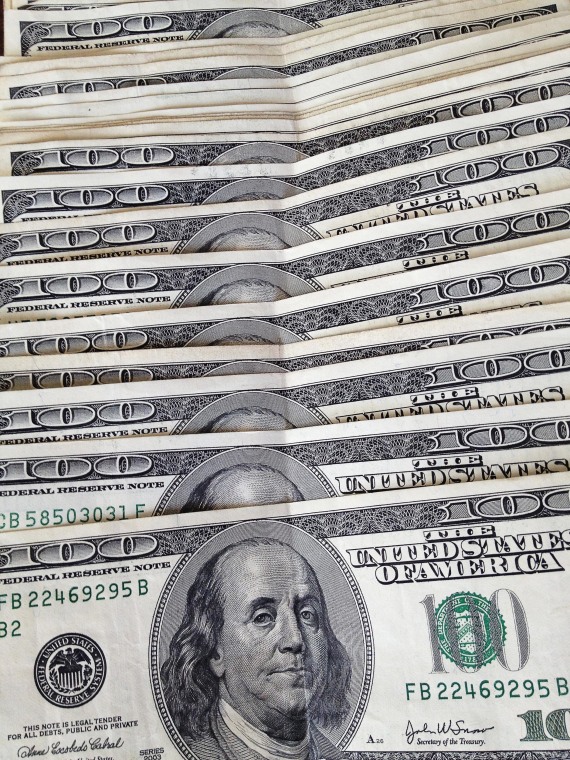 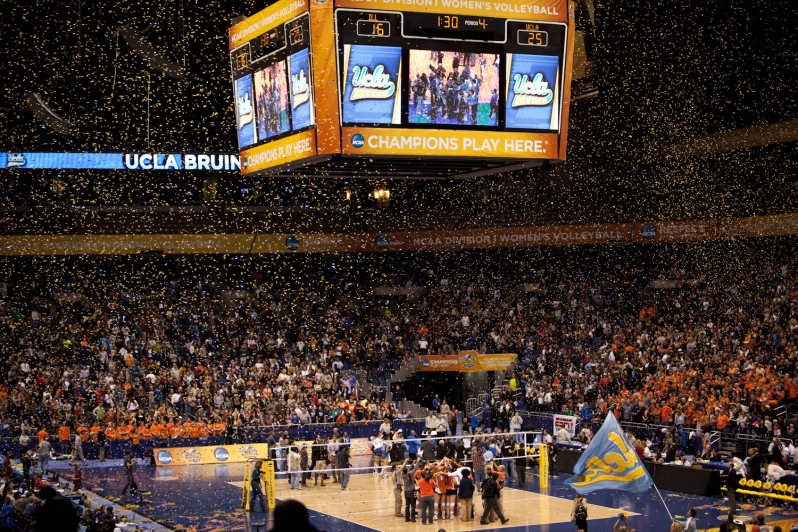 At most sporting events I’m in attendance because I want to *watch* the event.  I’m always tempted to carry my camera with me but I generally leave it at home so I’m not distracted.  When I attended the semi-finals of the NCAA volleyball championship this past December I left my camera behind.  However, when I saw that fans were allowed to carry in any camera/lens combo they wanted, I decided to take my camera and 70-200mm f/2.8L IS to the championship match and at least take a few pictures.

While warm ups were going on I experimented a bit with settings.  When shooting any fast-action sport one is generally trying to freeze the action (there are exceptions to this of course).  If you don’t use a relatively fast shutter speed you have no chance of getting a decent photo of a hard kill for instance — unless your goal is to turn the ball into a blur that you can hardly see in the frame.  Manual mode is pretty much a given in a venue like the Alamodome as the light never changes and being very well-lit a fast shutter speed is possible (the gym where my daughters play is not so well-lit and a really fast shutter speed isn’t possible) .  For shots of the action on the court I settled on using manual mode with 1/750s to 1/1000s shutter, f/2.8 aperture, and ISO 2000.  Generally the only time you vary your exposure is if you are taking shots of the crowd as opposed to the court (the crowd near the court was lit a stop or so less than the court). 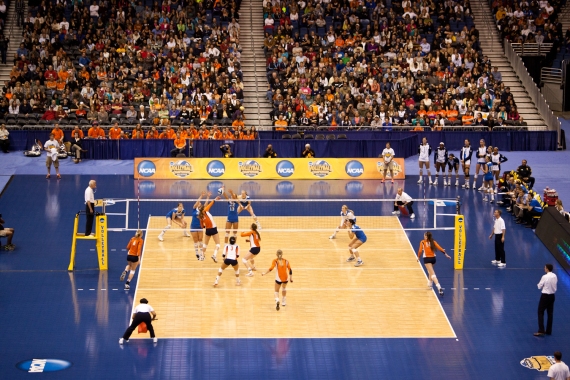 I was able to convince the elevator operator to allow me and my son upstairs to the skybox area so we could take some pictures from a different perspective.  While there, a pro photog plopped down two seats away from us and we got to chatting a bit.  I asked him what settings he typically used in the stadium and they were 1/1250s, f/2.8, ISO 2500 — not far off what I was shooting.  He said my settings were fine for the lens I was using (70-200mm) but he wanted that slightly faster shutter because he was using a 400mm lens and needed some help compensating for lens movement.  We talked about depth of field (DOF) a bit too.  Up in the balcony we were maybe 200 feet from the net which gave him a DOF of approximately 10-12 feet (depends on the camera body…he had one of the Canon 1D bodies I’m sure).  That really required accurate focus — if he accidentally focused on a back row the action *at* the net would be out of focus.  When I shot at 200mm, I had a great DOF of about 52 feet to work with.

My 5D mkii has great high ISO performance which is nice for these sporting events but one huge deficiency is its (relatively) low frame rate — not so great for sports.  I was kind of jealous of the pro as he machine-gunned frames when a kill was imminent.  Of course, the slow frame rate cuts down on the number of images I need to go through in post 🙂 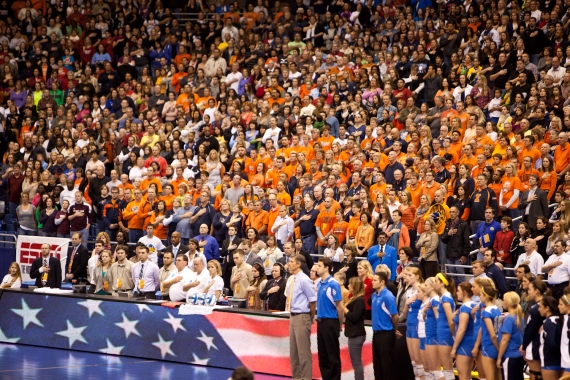 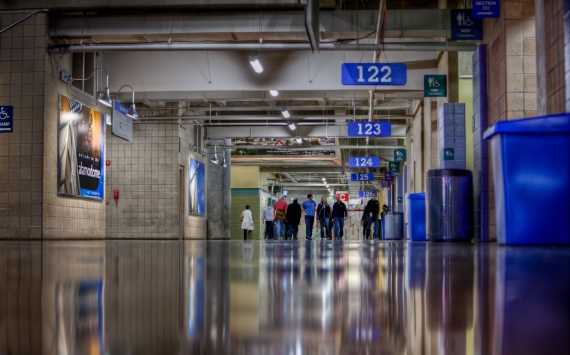 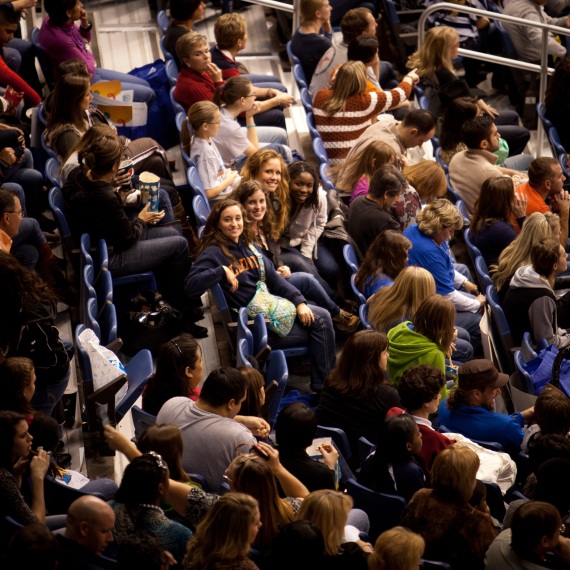 Most people who like to do HDRs are suckers for reflections.  I’m no exception and when my children and I walked into San Antonio’s Alamodome for the NCAA volleyball championship I saw these shiny floors and decided to fire off some brackets.  I set up the camera to fire 3 brackets (the max on Canon) with the auto timer and set the camera on the floor.  It would’ve been nearly impossible to change the settings without moving the camera so I didn’t even try.  I took another set of brackets with more crowds in the picture but the motion was too great to process reasonably.

I ran this through Photomatix and then brought the tonemapped image into Photoshop along with the brightest exposure.  I used a few adjustment layers on the bright exposure to semi-match it to what I wanted to fix — the people in the hallway and a few other areas where ghosting had caused some weirdness in the tonemapped image.  After blending those areas in, I went to work on the result with a half-dozen other adjustment layers (mostly curves).  There are some missing people-parts but I don’t really mind as it gives a sense of motion and the work to clone in new pieces wouldn’t be worth it.

The Blue Ghost, The Fabulous Thunderbirds, And My Fabulous Grandfather 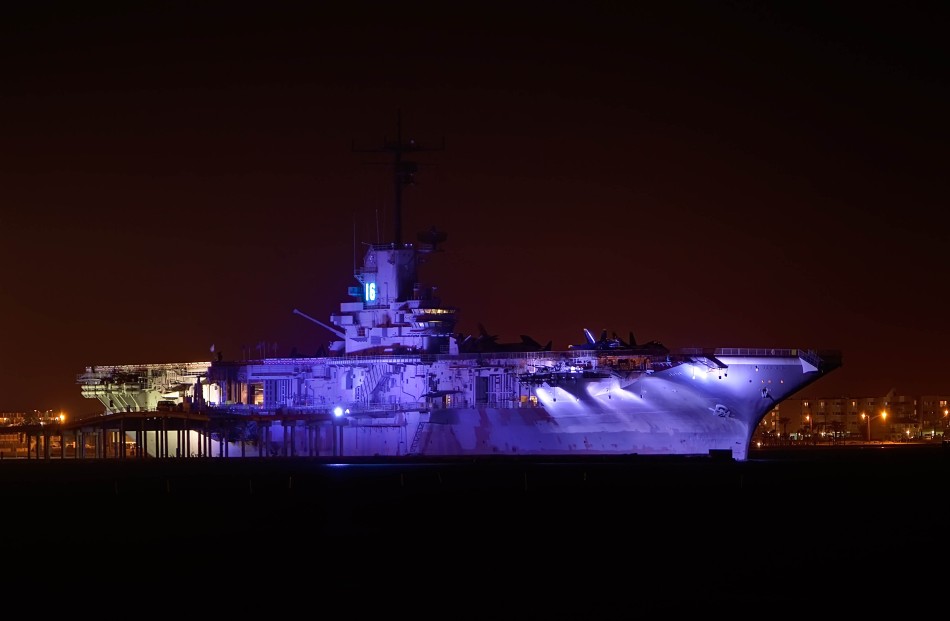 Many of these pictures are reruns but I thought I’d post them in honor of Pearl Harbor Day.  The aircraft carrier in the top image is the USS Lexington (CV-16) which was in service from 1943 through 1991 and now sits as a (very cool) museum in Corpus Christi, TX.  This image is a 3-exposure HDR.  I’m getting some odd pixelization on export from Lightroom which I can’t figure out but the point of posting this is not for the image’s sake itself anyway.

My grandfather joined the Navy during WWII (sometime after Pearl Harbor due to his age) and went through training to become a Navy pilot. I am very fortunate to have a 90-minute recording of him recounting his Navy experiences. My favorite quote: “I graduated from flight school on August 14th, 1945. The Japanese heard I was coming and surrendered the next day.” This is the most recent snapshot I have of him. 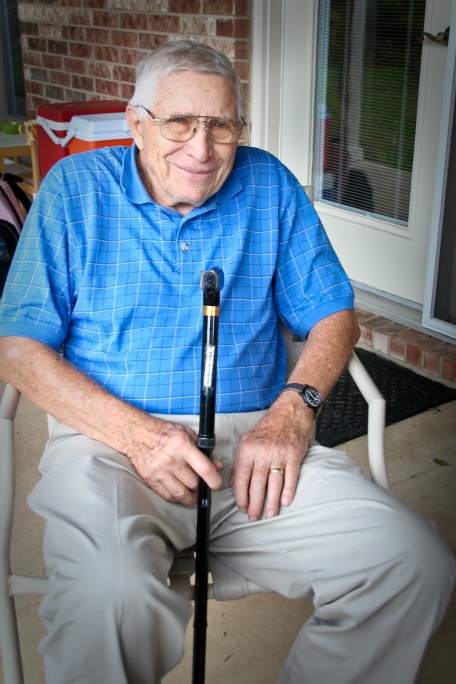 Hope you enjoy the rest of these photos from various air shows I’ve attended. 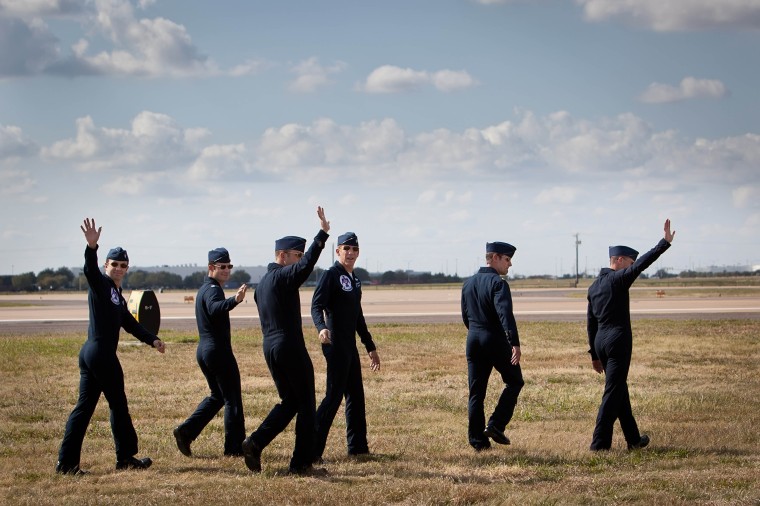 Thunderbirds Headed To The Flight Line 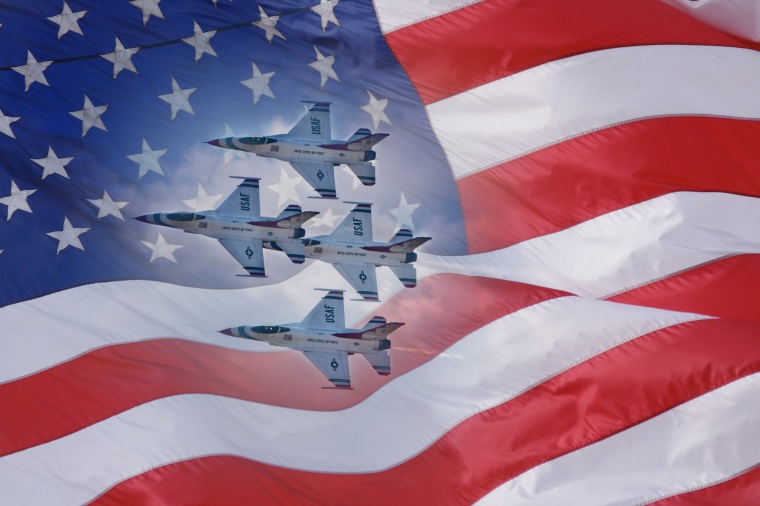 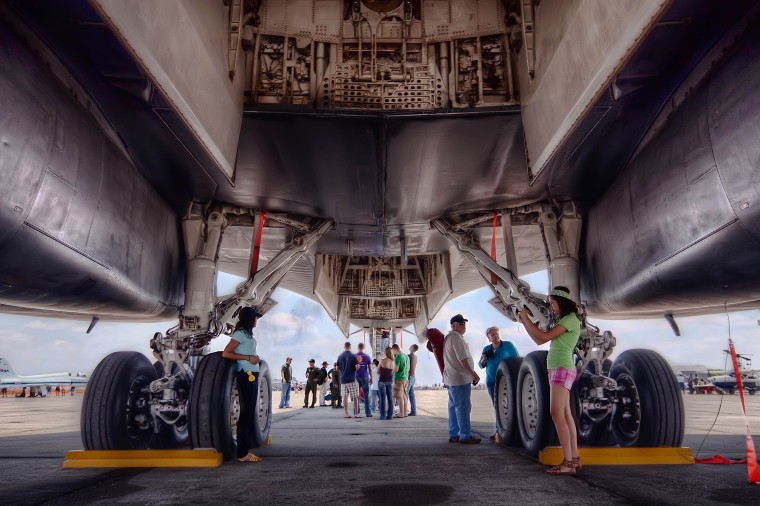 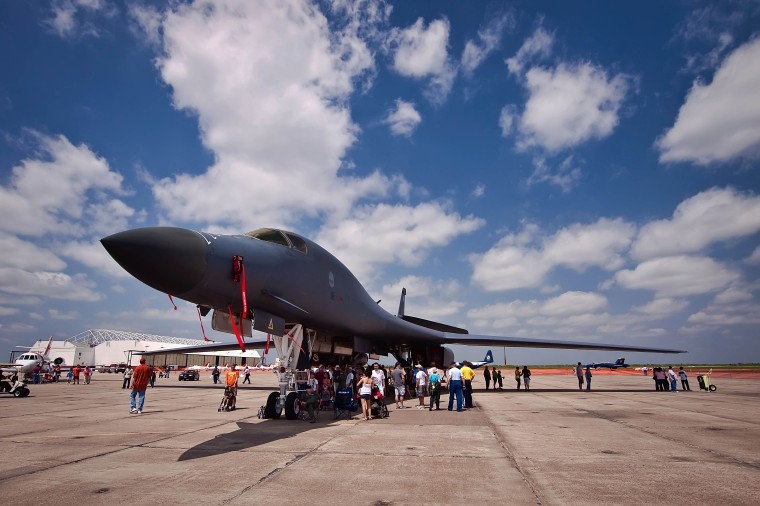 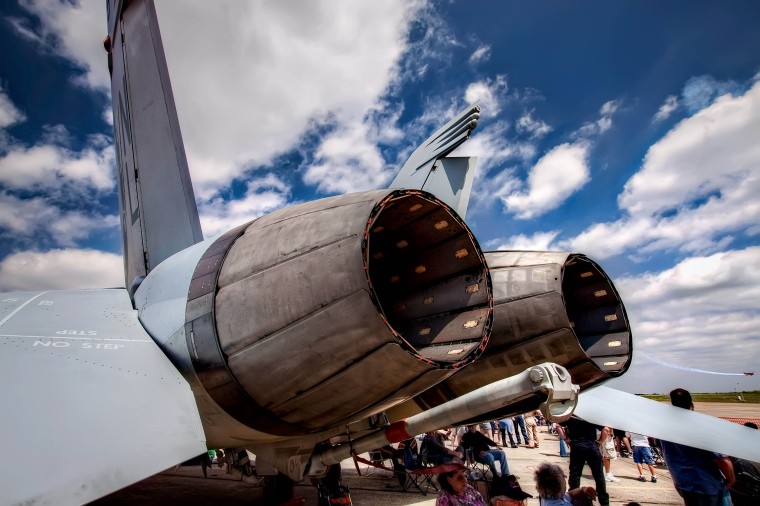 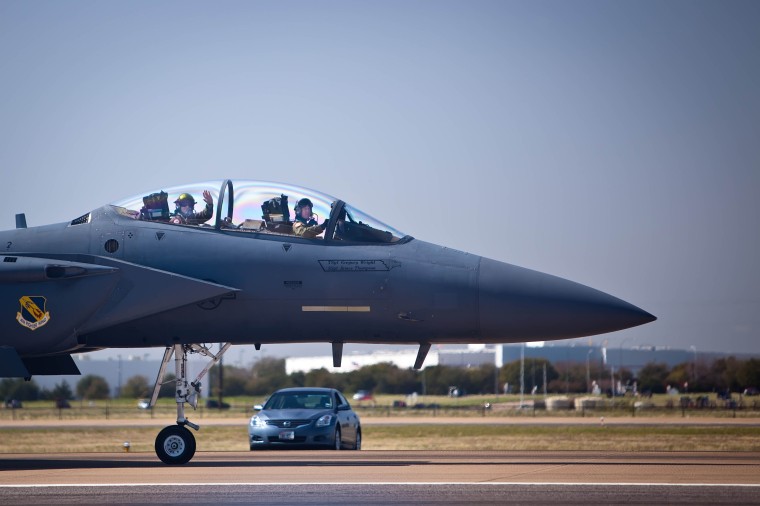 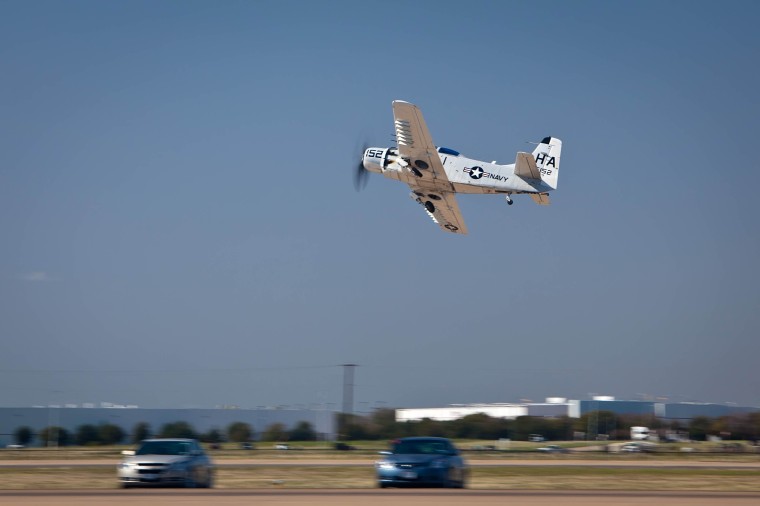 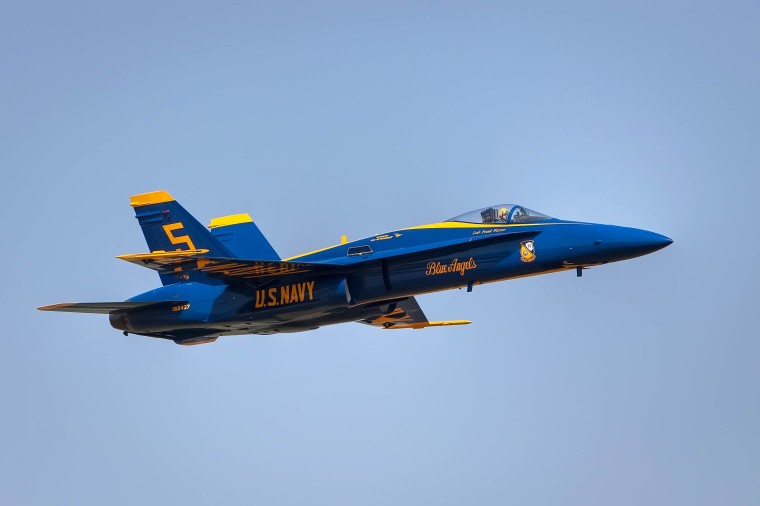 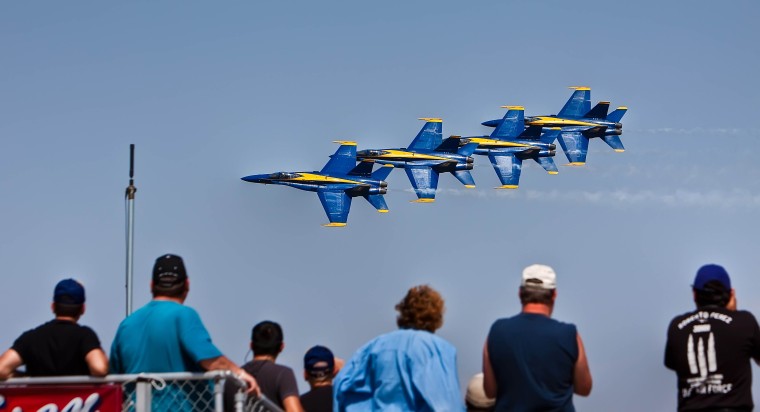 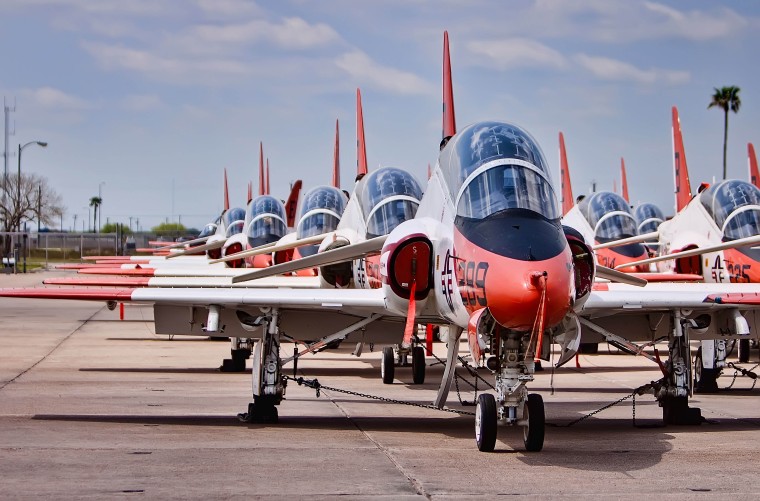 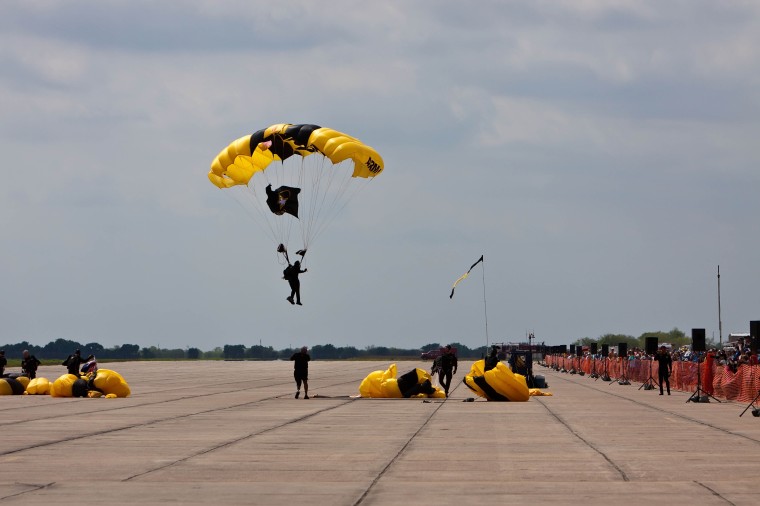 I had never seen an F-22 Raptor perform live until I attended AirFest in San Antonio a few weeks ago.  While I’ve always been impressed by other fighter jets that I’ve watched, and despite the fact that a high-speed pass is still my favorite thing to watch, the F-22 adds a new dimension to the performance of a fighter jet.  I was completely amazed by the maneuverability of the Raptor at slow speeds.  At some points it almost appeared to have the same capabilities as a Harrier.  I know basically nothing regarding the technical side of aircraft maneuverability and stability, I was nonetheless left wondering how the control surfaces of the Raptor could possibly maneuver the jet while it was hardly moving.  Even the slow-speed pass was rather impressive — nose was pointed way up and the ground speed was very slow.  I couldn’t figure out how it was getting enough lift to stay aloft.  I suppose that it’s a combination of lift from the wing (probably minimal at that angle of attack) and the sheer thrust of the engines.

The photo at the top of the page shows the F-22 as the pilot exposes the open bomb bay for the crowd.  I panned this shot using aperture-priority mode and auto focus.  It’s reasonable given the speed of the jet and the zoom I was using.  I’d probably go into full manual mode, set the focus ahead of time, then turn auto focus off if I were setting up for this shot again.

The shot below is quite blurry but illustrates an interesting phenomena call “shock diamonds” or “mach disks”.  The standing wave in the exhaust of a jet engine comes from the difference in pressures of the engine exhaust and the atmosphere.  For you techies there’s a pretty good explanation here: http://www.aerospaceweb.org/question/propulsion/q0224.shtml and also some information on wikipedia.

Finally, a very simple shot which IMO shows how sleek the F-22 looks while it flies.  The rounded belly and cockpit make the “old” F-18s look clunky.

I recently spent a day with friends and family at AirFest 2010 at Lackland AFB in San Antonio.  It was my kind of air show — lots of high-performance jets.  There were F-15s, F-16s, an F-18, and an F-22.  In addition, the Thunderbirds gave a great show.

It’s always interesting photographing aerial performances.  The brightness of the sky can fool you camera’s meter into underexposing.  If there are lots of puffy, white clouds it’s even worse and you’re often left with blown-out clouds if you want to get the exposure correct on the planes.

For the shot above I can’t even decide what exposure I like the best.  Deep blue sky with slightly underexposed jets?  Brighten everything up to lighten the jets?  Use an adjustment brush to lighten the jets while keeping the sky deep blue (tried it — doesn’t look natural).  You can see what I settled on above.  In-camera I over-exposed 1/2 stop and increased the exposure a bit further in Lightroom.  This is a shot which seems to vary quite a bit depending on the monitor you’re viewing on so your mileage may vary.

I spent the day shooting with my all-purpose Sigma 18-250mm because I didn’t want to lug my Canon 70-200 f/2.8 IS around.  It did OK but there is noticeable vignetting in many of the shots and just doesn’t match up with the Canon in sharpness (of course I didn’t expect it to).  I’ll bring the Canon next time for sure.

The Organ of Saint-Sulpice

In my old age I’ve come to love classical music over anything else.  If I *had* to pick, I’d say that Vivaldi’s cello concertos are my favorite in the genre.  Another favorite piece is Handel’s Organ Concerto #13.

I think pipe organs are pretty cool and I love to here them in person.  A few years back we attended a wedding in a huge San Antonio church and the beautiful organ was used for preludes as guests arrived.  Quite enjoyable…

My wife and I were fortunate enough to listen to an organ recital at Saint-Sulpice Church in Paris (organ is pictured above).  There are regular Sunday afternoon recitals which are typically performed by an American organist named Daniel Roth.  There is another organist who occasionally plays and we never did find out who was playing that day.  The organ is approximately 150 years old and is nearly the same now as when it was first installed (an electric blower being the most significant addition).

The church itself is quite amazing.  The current building was mostly constructed in the late 17th and early 18th centuries.  However, even the today the church is technically not finished as one tower was replaced in the late 18th century but its planned twin was never built (an old mismatching tower remains).  Saint-Sulpice is comparable in size to Notre Dame Cathedral (barely smaller) and we found it just as interesting inside.  The image below gives a view of one small portion of the interior.