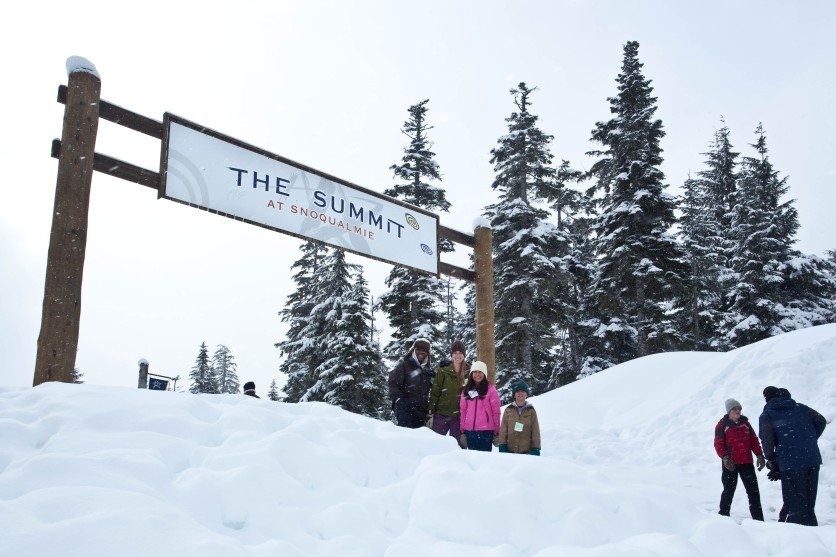 I never thought I’d say it, but after the heat today I wouldn’t mind being back in the snow (grass is greener thing).  In March we enjoyed some tubing at Snoqualmie Pass in Washington.  Some of us really didn’t have the clothes for it but we made do and decided to tough it out — it was great.  Given our snow activities I only brought along an old point-and-shoot for the actual tubing part, but the portrait at the top was taken with my DSLR on a tripod.  The idea with the tripod was that I would be in the picture as well, using the remote to trigger the shutter.  I couldn’t get the remote to work, however, and it was too far of a run around the snow piles to use the timer…AND I really didn’t feel like explaining to any passers-by how I wanted the shot composed (rarely seems to work out).  The little ones were freezing and were just ready to be done anyway.  For the other shots the point-and-shoot worked fine — mostly.  The main problem I had was that the white balance was all over the place and made each shot look like entirely different light.  I got a few “action” shots but just liked the “environmental portraits” better.

Relaxing On The “Lift”

I’m posting another HDR that I processed in my Photomatix vs Nik HDR Efex Pro evaluation war.  The subject here is the lobby of the St. Regis Hotel on the Hawaiian island of Kauai.  There was a multi-level water feature (a bit of which you see in this image) which provided all sorts of reflections and begged to be turned into some HDRs.  I didn’t have a tripod with me so I simply plopped the camera down on a ledge and fired of 9 bracket exposures in several locations.  This limited my composition choices but I was able to get the main thing I was after — the reflections in the water.  The hotel is situated in a beautiful spot on the island and commands a gorgeous view the mountains across a small bay.  If I’d had a tripod I would have taken shots from other positions to include a nice view of the ocean and mountains through the windows.

In this case Photomatix was dramatically better for quickly coming up with a result I liked.  The photo above is almost straight out of Photomatix — I only added some clarity/sharpening/noise reduction after that.  Nik gave some interesting results but did a lousy job keeping the clouds outside from being blown out.  Whenever I used the more realistic presets (realistic HDRs are generally my preference) the view out the windows was completely blown out.  No doubt I could have figured out how to get an acceptable result but it was taking a lot of time to begin to match what I got out of the Photomatix effort.

You’ll note the large shift in color cast across the image.  This was due to the prominence of daylight through the windows on the left side versus the interior tungsten lighting on the right.  It bothered me at first but it’s more realistic this way so I decided to leave the color as-is.