I’m sticking with the pool theme for this post.  We recently were invited to swim at a friend’s pool (cheers all around from the kids) and I decided to lug the camera along to get some pictures.  It was 5pm and the sun was high in the sky.  Fortunately when the kids were on the diving board the sun was slightly behind — meaning that if I could manage to get *enough* light reflected off the kids’ faces it would at least be *even-ish* light.  Coming up with that light — while saving the background somewhat — was the first challenge then.

The next challenge was the huge dynamic range in the skin tones.  In the song “Jesus Loves The Little Children” the line goes “Red and yellow, black and white, they are precious in His sight”.  We didn’t have “yellow” but we had red, black, and white figuratively speaking.  If you light for the lightest skin the darkest skin might be way too underexposed.  Expose for the darkest skin and the lightest gets completely blown out in the bright sunlight.  The challenge was to maintain the best balance in the situation — via my camera and flash settings.

My gear: Canon 5D mkii, Canon 70-200mm f/2.8 L, and Canon 580exii flash gel’ed with a 1/4 CTO.  I started out using shutter speeds of 1/200 to 1/250s to stay within the sync speed of the flash.  This was reasonable for much of the action and gave me quite a bit of flash power, which I needed when shooting from these distances (50’+).  Remember that the light follows the inverse square law — double the distance and you are only left with 1/4 the light.  Later I switched to using high-speed sync which allowed shutter speeds up to 1/500s to freeze the action but reduces the power that the flash can put out.  Both methods were effective in their own way.  With the 5D mkii I also had ISO as a lever.  I didn’t want to go too high with it (but I did use up to 3200 some of the time).  A higher ISO also reduces the need for so much flash power but you pay in noise.  Note that sometimes when using flash in bright light you *can’t* go very high with the ISO because the flash sync speed is a “long” shutter speed (relative to the overall brightness in the scene) and is allowing a lot of light to hit the sensor. In summary, I can’t tell you what the “best” settings are for a situation you might be shooting, but hopefully I’ve given you enough info to jump start your thoughts and get you experimenting with it.  Keep in mind that in the evening the light changes rapidly so you’ll have to adjust for that as well. 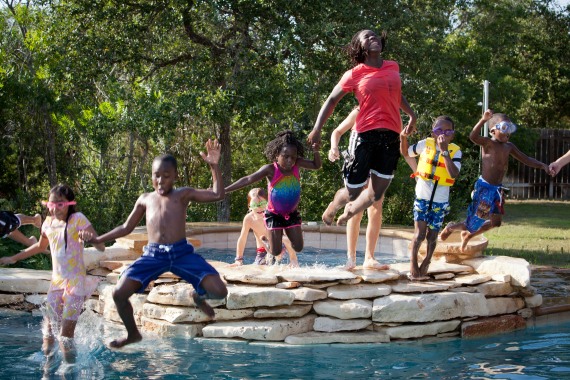 In Lightroom I still had to use an adjustment brush to even out the exposure of the faces a bit (in most pictures).  All in all, I was very happy with the way they turned out.  The important parts of the backgrounds were preserved and the kids are exposed well enough.  There’s always plenty of room for improvement though.