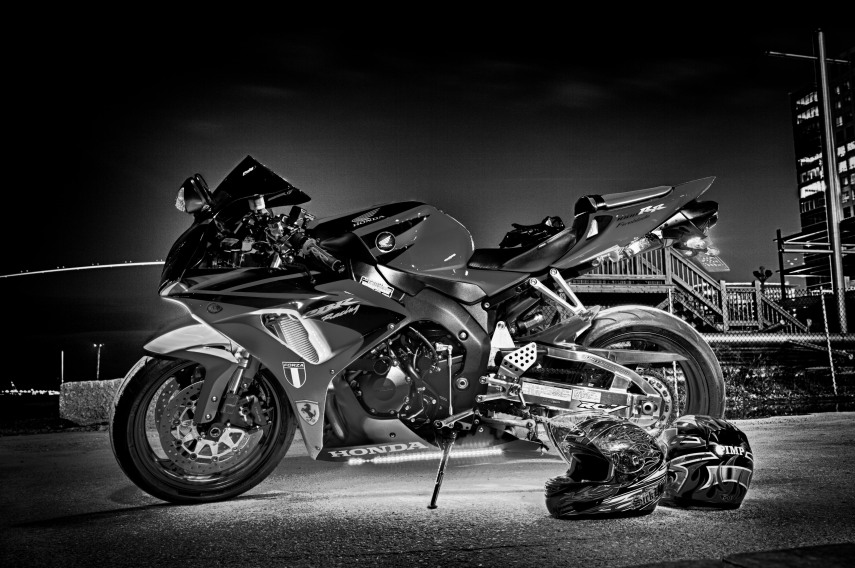 I’m making arrangements for another trip to Boston and it put in mind some of the photos I took on my last trip.  While taking this photo of the Boston Skyline, a young couple pulled up on a motorcycle, parked it, and walked off to enjoy the view of the skyline across Boston Harbor.  The bike had all sorts of accessory lights which cast a deep reddish-orange glow around it (see below but note the white balance isn’t quite right on the color version).  I took some photos of it and generated this B+W HDR.  There was a bit of noise in the result…I left it in, I kind of like it. 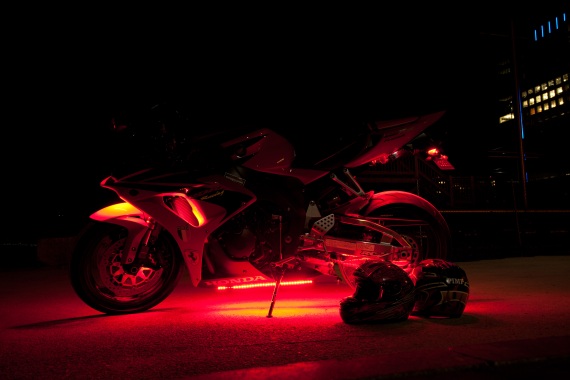 A couple of days ago a friend of mine emailed to ask my opinion regarding new tires for his car.  That car — pictured above — was my car and daily ride for four years and his inquiry reminded me of some of the pictures I had taken of it.  I wrote that I was thinking about selling it when I posted this street scene from Paris a couple of years back.  Shortly after that post I did sell it (obviously).  I think I gave my friend a really good deal, but my wife thought we should pay him to take it off our hands.  So, don’t tell her that I miss it!

As for the picture itself, first know that I wasn’t so into my car that I took pictures of it all the time.  Rather, I occasionally used it as a test subject when I wanted to learn something new about photography.  The picture above was taken in my driveway for a dailyshoot.com assignment — “mode of transportation”.  I started out to make a “normal” HDR (if there is such a thing) but bagged that idea.  Here’s what I wrote about it at the time: “Another opportunity to try for a decent shot of the car. From the beginning I intended to make a black and white HDR image so I took bracketed exposures. However, the tonemapped image (from Photomatix) was terrible and I quickly determined that the best image would come from the normal exposure with a few bits and pieces masked in from the over-exposed shot. Still HDR in the manual sense (manual processing), just not tonemapped in Photomatix (or similar software).  Lots of room for improvement but there’s that real job thing…”.  There *are* a few glaring defects in the photo but I like the overall look and decided to post it in spite of those.

I recently downloaded a trial version of Nik Software’s HDR Efex Pro.  I’d been semi-disappointed in many HDRs I’d created in Photomatix and had heard many people say they’d made the switch to Nik.  If you’re hoping for a complete review of Nik HDR Efex Pro I apologize in advance — I’m only going to give some impressions here.

First, a bit on Photomatix.  It’s great software in many ways and I’ve used it to make many cool (IMO) images.  However, in many of my HDRs of late I’ve ended up doing so much masking in Photoshop after tone mapping in Photomatix that I’m practically producing a composite of the original exposures.  Photomatix often doesn’t handle motion to my liking — leaving way too much work to do afterwards.  I’ll readily admit that it could be the user — I’m no wizard with Photomatix.  It could also be that I’m getting pickier as time goes on.  On the plus side, I find Photomatix to be much faster than Nik but I don’t process all that many HDRs so that’s not a huge factor.

I used Nik HDR Efex Pro to process all but one of the images in this post.  For my own comparison purposes I processed another Hawaii coast photo — similar to the one at the top of this post — with Photomatix.  It’s not completely apples-to-apples since I didn’t process the *same* photo but I ended up having to spend a ton of time in Photoshop fixing up the Photomatix image (basically ending up with a composite as I mentioned above).

As for the mechanics of using Nik HDR Efex Pro, it’s quite simple.  In each of the images (5-ish?) that I’ve processed with it I’ve started out with a preset and tweaked from there.  Of course I’m still learning all the sliders, etc. but I’m happy with it so far.  I find the “control point” concept useful (it defines circles in which you can separately tweak portions of the image) but I would prefer that it worked more like the adjustment brush in Lightroom where you can choose exactly where the effects are applied.  The final images here aren’t completely to my liking (some spots would get fixed if I were to spend more time on the images) but are illustrative enough for this post.

The Lord Is My Shepherd 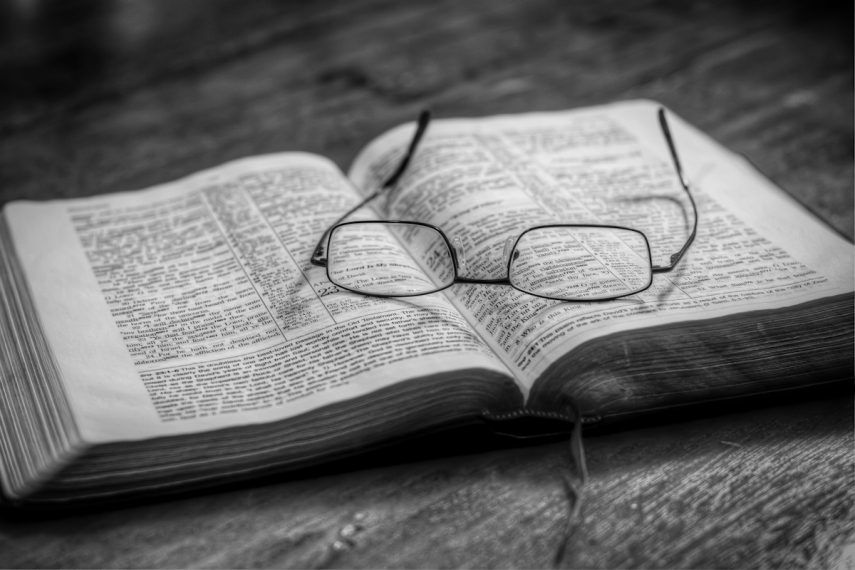 Busy, busy, busy these days and no time for (much) photography.  Posting my own photographic reminder of where I need to focus first…

As I’ve mentioned in several posts I’ve been going through some awesome tutorials by David Nightingale (http://www.chromasia.com).  David has quite a few tutorials relating to the “creative process”.  He walks you through his thought process on sample images and explains the choices he makes — ranging from basics like cropping and minor cloning to advanced masking and application of adjustment layers.  I can’t recommend the tutorials highly enough.

To create the image above I used many of the things I learned from David.  He’d probably be horrified and have thoughts along the lines of “You’ve read/watched my tutorials and this is all you got out of them!” 🙂 Nonetheless I’ll briefly describe what I did to get this final image.

To start off, let me say that for this image I did not crop nor did I clone or do spot healing edits.  There is some work which could be done in these areas but I was focused more on trying to execute a certain “look”.  I’ve learned (from the tutorials and via experimentation on a half dozen images or so) that it’s rarely best to convert an image to black and white using a straight grayscale conversion or desaturation.  My main objective was to practice getting a “nice” B+W (or toned monochrome image — that’s technically what my final image is) using the channel mixer in Photoshop.

Here are the layers I ended up with: 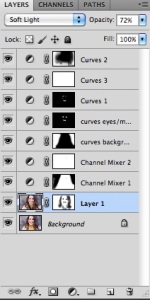 Layers Used For This Image

The first thing I did was duplicate the background layer and change the blend mode to “soft light” at 72% opacity (played with the opacity until I liked it).  This gave this image a soft glow.  It brightened the skin significantly.  I did not want this effect on the eyes, hair, and scarf and you can see that I masked the background layer back into these areas.

I then used two channel mixer adjustment layers to get a monochrome image.  The first layer used values R:+43, G:+39, B:+18.  I decided that the background needed different look so I used the B+W with blue filter setting with R:0, G:0, B:+100.  Where did I get the numbers for the channel mixer layers? I experimented until I liked it. I won’t go into how the channel mixer works(because I can’t remember it all anyway) but the settings you choose can have drastic effects on your images. As a general rule of thumb you want your RGB values to add up to around +100 for a “normal” looking image.  I leave further theory/study up to the reader until I understand it better myself.

The first curves adjustment layer lightened the background to give more separation between it and my daughter. The second slightly brightened and added contrast to the eyes, lips, and teeth.  The third curves adjustment brought up the midtones and was masked only into the eye sockets and a small shadow area between the chin and lower lip.  This evened out the levels in the face.

Up to this point I was working with a true black and white image.  I wanted to tone the image a bit and I used the “Curves 3” layer to do that.  I brought up the reds a bit in the shadows and midtones and decreased the greens and blues in the midtones by adjusted the red, green, and blue channels individually.  There are endless toning possibilities using curves.  Of course, tools like Lightroom have many presets available that are often satisfactory but using curves gives you ultimate flexibility — you can change the colors infinitely and even narrow your adjustments to particular parts of your histogram.  Here is what the toning curves looked like: 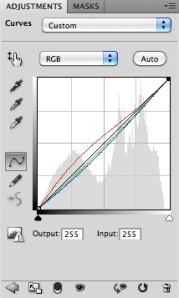 The “Curves 2” layer darkened the image and was masked in selectively to add some vignette.

Here’s the image without the toning curves layer. There’s no right or wrong answer but I’m curious what others like — toned or full B+W?  Honestly I have a hard time choosing between the B+W and the toned image — I like both quite a bit.  I think the toned version works well with my daughter’s brown eyes and brunette hair color.

My daughter watched someone’s children at our house tonight and while we were all playing around with them I decided to get the camera out and see if I could capture a few cute pictures for this girl’s mother.  This little girl was entertaining me with the jack-in-the-box while I laid on my belly in front of her snapping pictures.  This was a really cute shot but I ran into one problem.  I was shooting with 50mm lens and an on-camera flash with a 1/4 CTO gel bounced up and slightly behind me.  That setup was producing great images until I ended up in a spot on the floor near our (very) red recliners.  The back of the recliner sloped back such that when I rolled up against it the flash pointed directly up into the red cloth.  Well, that made for a VERY pink child — no recovering from that without a lot of work in post and I doubt that I could have actually pulled it off.

So, I decided to go B+W with the image and ended up finding a great Lightroom preset called “WOW Glow 10” which produced a grayscale image that was very pleasing.  It was certainly better than I was coming up with doing my own B+W conversion with the channel mixer in Photoshop.  I added some sharpening around the eyes, boosted contrast in the eyes with an s-curve, added a heavy vignette, a slight crop, and that was it.  I have some ideas for improvement (I’ve been going through David Nightingale’s tutorials and have all sorts of ideas now) but IMO this is a great result for a 5-minute photo shoot and 5-minute edit.  I’ll probably play around with some toning via curves when I get the chance but otherwise might just call this one done.