I’ve been very delinquent in taking the picture above — my youngest girls in their matching winter dresses.  Between the baby’s sleeping schedule, weather, and that general “don’t feel like doing it now” feeling that we all get (wasn’t just me) we haven’t gotten these done.  I took the day off today and I made it a definite to-do item for this morning when our infant (“Dolly” as we often call her) is usually happiest.  We ended up pushing it a little — Dolly was ready for bed by the time we were done.

The usual caveats apply: I don’t like this or that, I’m not happy with the light (we waited too late in the morning), I don’t like the setting/background, and I’d change/fix/tweak many things.  There wasn’t so much posing as there was “Hold her and look at the camera quick before she gets fussy”.  However, my wife says: “I don’t care about the professional photo — I just want a picture of them together with their dresses so get it done”.  It’s hard for me not to try to make everything as professional looking as I can, however meager my attempts may be.

Exposure was a bit tricky.  The dark skin, light skin combination was challenging to balance (always takes some effort in our family pictures since we have four races and a wide range of skin tones).  I chose to use no additional lighting — we just wanted to get this done and not fiddle with triggers, umbrella, and adjusting flash power.  The sun was in and out of the clouds which affected the exposure dramatically.  Ultimately I determined my exposure by metering Dolly’s light skin to avoid blowing it out (I shot in manual mode).  For my taste we couldn’t go any brighter than you see above and we got sufficient exposure in the dark skin so we could make do.  There were of course the usual difficulties in getting two children to look good at the same time.  The littlest didn’t cooperate very well — she wasn’t a complete crank but wasn’t her usually smily self.  In the end I ended up swapping a head to get them both looking good.  I lightened the dark skin a bit more and tweaked the image with several curves, exposure, and saturation adjustment layers.

Most of our family’s favorite pictures are candids like these.  While at the dinner table our daughter was being cute as usual and the 50D was just sitting out from having been used for these pictures of a fawn.  My 70-200mm lens was attached and while I was tempted to open all the way up to f/2.8 (love the bokeh) I stopped down to f/4.5 to keep a little more depth of field in the portraits.  The toughest part, as always with a wriggling baby, was focusing on the eye and taking the shot before she moved out of the plane of focus — which was 2″ at the wide end of the lens with this body/lens combo @ f/4.5.  I had mixed success but the shots we ended up with are fun.  Exposure, contrast, vignette, and noise reduction in Lightroom… 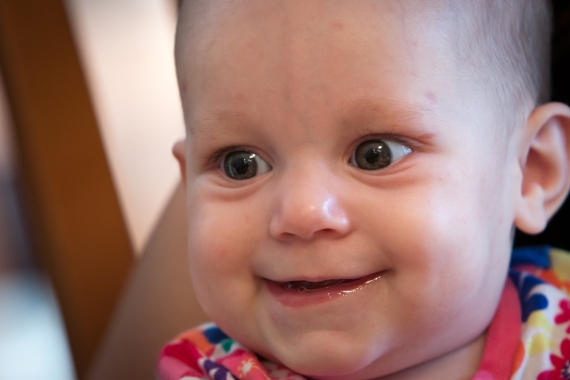 So…Are You Going To Take My Picture Or What?

When I sat down at the dinner table this evening I found this grin staring at me.  How could I not get the camera out?  I used my Canon 5D mkii with the 70-200mm f/2.8 — shooting wide open to blur the window frames and scenery outside as much as possible.  I bounced a flash off the wall behind me.  There was no posing, very little attention to what was in the frame, and only minimal attention to composition.  I spent most of my efforts on catching my daughter’s eyes in focus.  With the shallow DOF and my daughter’s constant motion it was tough and I missed it a lot.  How could I not love the pictures anyway?  I took 60-70 shots and ended up with quite a few keepers.

Editing was all done in Lightroom — white balance, slight crops, exposure, contrast, vignette, and a tad bit of noise reduction.  I did none of the typical overdone baby skin stuff.  In fact, I did no “retouching” at all (it would have been a lot of work to fix all those healing chicken pox marks anyway).  No skin edits, no eye enhancements.  They are cute enough the way they are 🙂 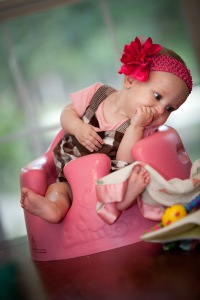 Just plain cute.  I grabbed this while my wife and her sister were trying to get our youngest to smile for the iPhone.  Sometimes these are the best pictures.

Since this is supposed to be a photography blog I can’t leave out the processing…I hit the “Auto” button and did a couple other minor tweaks in Lightroom.  Manual mode, flash bounced off the wall behind the camera.

I recently posted our Thanksgiving Day family portrait and today wanted to show how I modified it.  The only direction I gave to the family for the picture was “wear something solid-ish on top, and something denim on the bottom”.  As you see in the picture at this link, we all ended up in rather muted colors except my youngest son who had a bright yellow shirt on.  I was busy thinking about how to add fill to the shot, position us reasonably without taking all day to do it, etc. (I should have spent a bit more time on the positioning).  So, when the bright yellow shirt was pointed out to me I thought to myself, “Whatever…it won’t matter”.  Of course, when editing the photos it bugged me to death and I wished I had changed it.

The solution?  Photoshop’s “Replace Color” adjustment.  I used the tutorial linked below as a starting point to learn about it and experimented from there.  Other than choosing the new color, the key setting for me was the “fuzziness”.  This determines how aggressive the automatic selection is.  What I found is that because of the variation in saturation throughout the shirt I had to slide the fuzziness way up which causes other parts of the image to also be selected (trying to automatically select the shirt’s colors reveals how much variation is really there).  I thought the checkbox for ‘Localized Color Clusters” (not shown in the tutorial but exists in CS5 at least) would help minimize the selection but I didn’t see a lot of difference once the the fuzziness was increased much. I also used the +/- eye droppers to add/subtract from the selection. Finally I needed a bit of manual masking to only change the shirt and not other areas of the image.  Something which is more solid in color would far easier to use this tool with.  The resulting photo is above — a 5-minute edit.  I will probably do another version and use a color picked from someone else’s shirt so that it matches even better with the rest of us.  When I look at the new image I kind of think it doesn’t look right because *I* know that I made the edit but in my brief survey of people who didn’t know about it, not a single person noticed anything.

Here’s the link to the tutorial I started with.

We *tried* to take some portraits of my wife and daughter but not everyone was cooperating.  Eden was a bit fussy when we posed her but I snapped off some frames anyway.  This is image is one — the ONLY one — worth keeping.  Despite being the only good image I call it an outtake because it’s not at all the image I was after.  I like the expression on my wife’s face and Eden’s outstretched arms but it has a few technical issues.  For starters, because I was shooting near wide-open and my wife was moving back and forth to rock the baby, the focus is a bit off.  We’ll try again soon.

This was shot with two lights: a Canon 580EXii at about 1/16 power in a small softbox at camera left for the key light and a Canon 430EXii high, behind my wife at camera right for hair/highlight (1/64 power and gel’ed with some ND to kill more of the power).  The background is a sheet we hung in the hallway (yep, I need to get some backgrounds).  I started by setting an exposure which killed the ambient.  Using my older daughter as a test subject I then added the key light followed by the hair light.  The background is not lit because my intent was to make it pitch black.

Before even shooting this my intent was to process in black and white but I haven’t even attempted to go that route in processing yet.  I tweaked some areas in Lightroom then brought the image into Photoshop.  I used masked curves to brighten the hair, eyes (a tad), and a few areas of skin.  I also used curves to darken a few areas.  One final curve dropped the red channel ever so slightly.  I sharpened the hair and used noise reduction on the rest of the image.  That’s all I can remember anyway…

Here’s another version of the same image which I processed slightly differently.  I can’t personally decide which I like best although I lean toward the one at the top of the post which blends subject/background relatively seamlessly.

And Then There Were Ten… 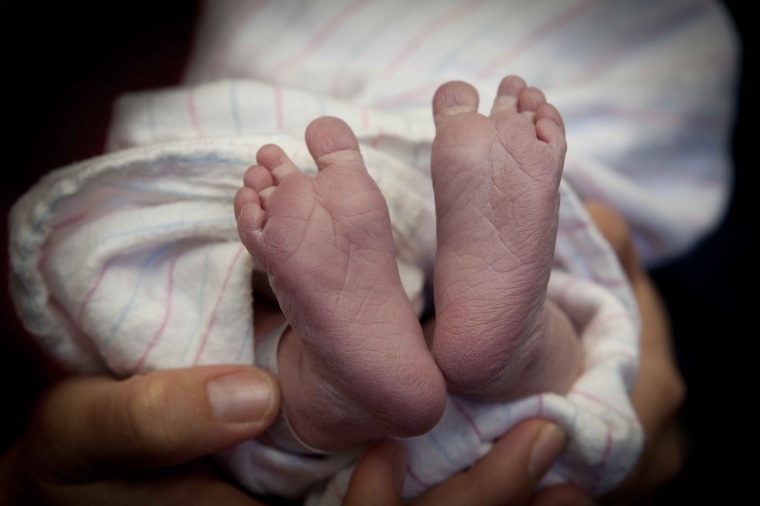 This week we adopted a beautiful baby girl named Eden Joy (our tenth child, sixth adopted). She is absolutely precious (and all those other mushy words). Eden’s birth mother said after her birth, “Today I am going to give the greatest gift I could ever give”.  We agree — Eden is truly a great gift from God and a great responsibility which God will help us fulfill. “Every good and perfect gift is from above…”, James 1:17.

No real “photography” stuff in this post.  The pictures aren’t contrived or posed.  I paid (a little) attention to composition, reflections in the nursery window,  and what aperture I used but otherwise was just caught up in the excitement of the day.  Post-processing was minimal with white balance being the most necessary adjustment.  I did re-learn a lesson about shooting in fluorescent lighting but more on that some other time.  Some random pictures below… 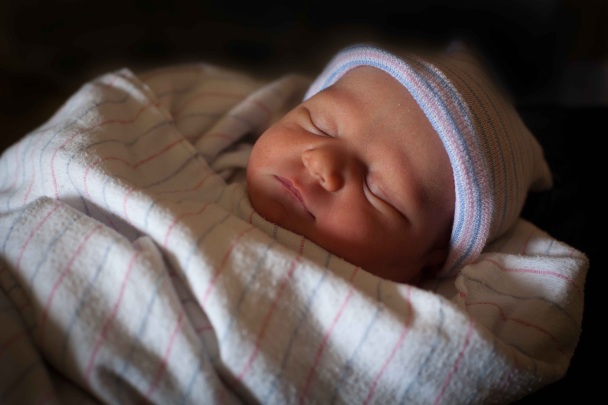